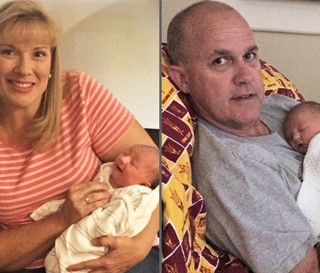 Jeanine Lavine with her late granddaughter, Ellie. Kent Lavine holds his granddaughter Ellie, who died when she was just 10 days old.

Her name was Ellie. A beautiful baby with rosebud lips and the sweetest little smile. A tiny bundle of hopes and dreams to last a lifetime. But Kent and Jeanine only got 10 days.

Their precious granddaughter succumbed to a deadly viral infection, leaving not only her parents—but her grandparents drowning in grief.

“When a grandchild dies, grandparents grieve twice,” says Lisa Schmitt, executive director of New Song Center for Grieving Children. “They mourn the child AND they feel the pain of their own child’s suffering.”

Kent and Jeanine Lavine lived that agony—trying to support their daughter as she suffered losing her first baby, while also grieving Ellie’s loss themselves. “When my daughter Jessica cried on my shoulder,” Jeanine said, “I felt like I couldn’t break down, that I had to be strong for her.”

Realizing they couldn’t get through this on their own, they sought help from New Song’s Enduring Ties program which provides no-cost grief support specifically for grandparents. Funded by donations and grants, it’s a collaboration between Hospice of the Valley, Phoenix Children’s Hospital and Ryan House, a medical respite center for medically-fragile children.

“Being with a group of people going through the same thing, helped us feel understood. We opened up and fell apart sometimes. We leaned on one another so we could be stronger for our families. We discussed which stage of grief we were in and shared ideas for getting past hurdles like anniversaries and holidays,” said Kent.

Jeanine also learned tools to strengthen her relationship with a grieving husband—so they could support each other if one of them was having a particularly bad day. And there were some bad ones. Kent admits to running off to coaching practice to escape the sadness for a few hours, then feeling so guilty he’d sob in the car driving home.

The idea for a Grandparent’s support group came from Diane Eckstein, who was mourning the death of her stillborn granddaughter, who died just four days before a scheduled c-section to deliver her. “I realized that grandparents need their own experience to help them get through this kind of dual grief, and I couldn’t find one. So we created a place where we could speak openly about what’s going on with our own feelings as well as share the pain of our grieving children, our worries about them and how to be there for them.”
What many of these grandparents didn’t expect was friendship. Such deep bonds were built that 14 months later they’re inviting each other to parties and family barbecues.

“It’s a club nobody wants to be part of,” says Kent, “but we are very lucky to have them as part of our lives now.”

Life has come full circle for both families. Diane Eckstein has a happy, healthy granddaughter who is 3 months old now. And the evening I spoke with Kent and Jeanine, they were babysitting their new grandson, Jacob Elliot. His middle name is in honor of his sister Ellie.

Ironically, Kent and Jeanine were babysitting because their daughter and son-in-law were attending New Song’s grief support group for parents who have lost a child.

“We want them to keep going. A new pregnancy, a new baby—it stirs up emotions all over again. Should I be this happy about this child, when I don’t have Ellie?” Jeanine sighs, “That’s the beauty of these support groups… they tell you it’s okay. This is your new normal.”

“Grandparents are the forgotten grievers,” says Amanda Sahli, bereavement coordinator at Phoenix Children’s Hospital. “It has been an honor and a privilege to watch every one of them walk this journey. We hope others who need this help, will join us.”

This special group is open to all grandparents grieving the loss of a grandchild of any age, regardless of the cause of death or how long ago the child died. Meetings are every other week from 6–8:30 p.m. and a light dinner is served. There is no cost. For more information, please call (480) 951-8985 to speak to a member of the New Song Center staff.