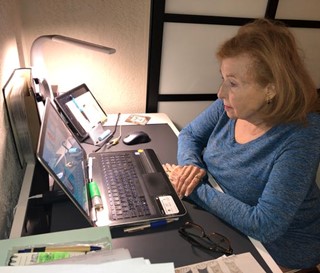 azcentral.com
Dec. 9, 2020
by Helena Wegner, Special for The Republic

Penny Bankhead says a prayer and spends a few minutes centering herself. She sits at her desk in her spare bedroom in northeast Phoenix, powers on her laptop and logs on to Zoom, where she is greeted by a screen full of familiar faces: volunteers in a grief support group.

It’s 6:45 p.m. on a Monday; Bankhead is early and prepared. In 15 minutes, the volunteers will leave her screen and their faces will be replaced with the faces of parents mourning the loss of a child.

Bankhead has facilitated grief support groups for more than 10 years alongside her husband, Tom Bankhead. The two used to meet with grieving parents twice a month in a room inside Hospice of the Valley, a nonprofit end-of-life care in Phoenix that also provides support for those with chronic illnesses, dementia and Alzheimer’s. They would eat a family-style meal together and chit-chat around the table before breaking up into groups for hour-long sessions held in a circle, all facing one another.

Until March, the meetings of “Enduring Ties,” the grieving parents’ group that is part of Hospice of the Valley’s New Song Center for Grieving Children program, started with an icebreaker — “If you were the weather today, what kind of weather would you be?” Bankhead might have asked. Then, the parents would talk about their experiences and play games like Jenga or ping pong just to get everyone laughing.

But then the COVID-19 pandemic came along and changed everything. The support group meetings moved online and Bankhead, a 73-year-old artist, is now left to recreate the comfort shared by physical human interaction on a computer screen.

In many ways, the pandemic has left us all to collectively mourn the loss of a way of life before the virus — the loss of normalcy, the loss of the way we connected with others and the loss of whatever plans we once had but can no longer realistically pursue.

Since the virus began to spread, people across the world have sought to find comfort amid the fear through virtual connections. That’s not new in the age of the internet and social media, but it is now being used to fill the voids left by the absence of in-person interactions in whole new ways.

For grief support volunteers like Bankhead and the bereaved whom she counsels, virtual meetings are the best possible alternative, but one that is filled with complications. The bereaved no longer have a temporary escape from home, a place they once shared with the loved one they lost.

The volunteers must relearn how to comfort others from afar and handle the technical difficulties that can easily distract or derail a virtual meeting. Often, Bankhead has had to stop people mid-sentence — “Hey, I can’t hear you” — because they forgot to unmute themselves when trying to speak up.

She has also had to adapt to the many changes the virus has brought onto her own life, like choir practice via Zoom even though, she said, “you can’t really sing” on Zoom. Because she fears falling ill, she has kept her distance from others, isolating herself as she tries to make others feel less alone in their grief.

“I think if you're giving, it always makes you feel better,” she said. “I don't know why that is, but in giving you receive.”

She spends most of her days in her art studio working on an oil painting or a resin project for her grandchildren. The 12-by-12 foot studio, quietly nestled behind her Phoenix home, is a safe haven for her creativity and a safe place for her. She works there all week. Come Monday evening, though, she takes another breath, repeats the same prayer and logs on to Zoom to see the same familiar faces.

Staying at home and keeping our inner circles small can have lifesaving outcomes during the pandemic. But when people are grieving loved ones, the weight of isolation can take a deep psychological toll.

If the loss is sudden and unexpected, it can trigger a condition known as complicated grief — a traumatic response that is more difficult to get over, according to Dr. Cheri Marmarosh, a psychologist at George Washington University in Washington D.C. Depending on the type of loss and the person, the intensity of the grief can differ from a person experiencing depression to suicidal ideation.

A support group plays a critical role in alleviating a person’s loss and isolation because it allows them to feel less alone in their pain. And when a person can share their grief with others, they are able to make meaning out of their suffering and feel a sense of purpose and hope in life again, Marmarosh said.

Technology provides a platform for people to connect to a support group from a safe distance from the comfort of their home, even if online meetings lack the ability for eye contact, physical comfort and a sense of confidentiality. Marmarosh, who also counsels individuals, couples and groups, said research supported virtual meetings were equally effective as face-to-face therapy.

Across the country, grief support leaders also shifted their techniques to meet the needs of a virtual environment as people adapted to seeking community in new ways. Marmarosh said when she conducts virtual meetings, she will call the person’s name and let them know she is looking at them.

As a Zoom group gets larger, she will check in with individual participants more often to see how they are doing; the more people are in a meeting, the smaller each person’s face becomes on the screen, making it harder to see their facial expression.

The training had to change, too. Lisa Schmitt, executive director at New Song, said they went through “informal” technology tutorials created by the IT department at Hospice of the Valley.

These consisted of becoming familiar with different Zoom features, such as learning how to create breakout rooms. The volunteers also became technology troubleshooters, helping families join Zoom even if both the family and the volunteer are joining the platform for the first time.

Bankhead sometimes encounters technical difficulties on her own devices. Bankhead has Zoom downloaded on her cellphone and on her computer, however, she said she would be of no help to a parent having issues connecting on a tablet, a device she is untrained for.

Perhaps one of the most challenging things facilitators have had to learn is to connect with children and families through a screen.

New Song grief facilitator Cassandra Marrujo has found creative ways to provide comfort in the virtual space for individuals who lost their partner or spouse. When people gathered in person, they sat in a circle with a tissue box placed in the middle of either the table or on the ground.

The container served as a silent gesture of support from others in the room during a period of vulnerability and grief because it allowed members to reach over, grab a tissue and hand it to the person in tears — an acknowledgment of their pain.

But there is no tissue box on Zoom. Instead, Marrujo verbalizes, “If I were next to you, I would hand you a tissue right now.” These words allow her to provide verbal recognition and empathy to the person in pain in a new way.

Bankhead also pointed to the importance of the tissue box. In one of her evening meetings with parents of deceased children, she watched a man sob in his Zoom box. She said the man lives alone with his son and dog, and it drove her “nuts” seeing him cry while no one could physically hand him a tissue for his tears.

“Some of the best work is from one grieving adult to another grieving adult,” Bankhead said. “You know where they start helping each other pull through because so many times they lose who they thought was their support group.”

Despite the limits of virtual spaces, facilitators have adapted to only reading a person’s facial expressions and silences because they can no longer rely on body language. Without seeing a person’s lower body, Marrujo communicates with people often to see if what they are saying actually meets what they are feeling.

She tells them “I can sense your frustration,” “Is this how you are feeling?” or “Do I understand that correctly?”

“So, you never know everything that's going on inside the human brain, but you can watch the mannerisms. I'm not finding that to be a handicap on Zoom,” Bankhead said.

New Song Center used to have meetings at six locations in and around Phoenix, a support group founded in 1987 with the purpose of providing in-person services to grieving children and families. One of them was St. Barnabas on the Desert, a church in Scottsdale that buzzed with chatter every other Tuesday, the smell of pepperoni and cheese pizza wafting through the air.

That’s how the evenings started, with children and families lined up and waiting their turn to grab a slice and some lemonade. Time is nearly forgotten in the frenzy until a volunteer would call out: “Does anybody have a birthday coming up in the next two weeks?”

Adults hustled to take their seats, pizza plates in hand, as children gathered in the center of the room to celebrate an upcoming birthday with a song, clapping and more laughter, even though each one of them, every family in the room, has lost someone. After the celebratory dinner, children and adults filed into separate rooms — the children divided by age, the adults by the circumstances of their loved ones’ deaths — where they spent the next hour or so processing their grief through games, arts projects and storytelling.

These days, the hallways and rooms at the Scottsdale church sit mostly empty. Since COVID-19 cases started to rise in March, the New Song grief support groups at St. Barnabas and elsewhere have yet to meet in person.

The number of virtual support groups organized by New Song have decreased in recent months, but the program itself has seen an increase in enrollment since the start of the pandemic. The support groups were the “primary point of connection,” Schmitt said, but New Song created a variety of robust resources for families to access digitally including virtual workshops, online learning, training and events — opportunities that were fewer pre-pandemic.

Bankhead became a volunteer in 2010, seven years after she lost her mother, though she was prepared for death and grief long before her passing. At four years old, Bankhead’s baby brother died shortly after he was born.