“And so it stays just on the edge of vision,/ A small unfocused blur, a standing chill/ That slows each impulse down to indecision./ Most things may never happen: this one will.”

So wrote British poet Philip Larkin in his 1980 poem “Aubade.” Though the title evokes the welcoming of a new dawn, the subject of the poem — this thing that is certain to happen to all — is death.

Death is the only experience aside from birth that is shared by all, and it happens every day. Yet it is one of the hardest topics for humans to address.

Some confront this reality of life more than others. On Thursday night, a group of them — including social workers, police officers, EMTs and hospice caregivers — came together to talk about their experiences with it at an event hosted by Arizona State University's Project Humanities, “The Bell That Tolls: A Conversation on Death and Dying.”

The public panel discussion kicked off the fall 2018 season of Project Humanities events, which include more discussions on such topics as PTSD, documentary screenings and even a drag performance, as part of the initiative’s effort to bring people together to listen, talk and connect.

“We hear a lot lately about suicide, self-harm, the shooting of unarmed men and women by police officers. … So death is everywhere,” Project Humanities Director and ASU English Professor Neal Lester said.

“The idea behind this panel was to take the conversation of death and dying — probably the most universal thing we can imagine — and move it into a space where it’s not taboo and look at all the different aspects of it in order to understand what it is to live.” 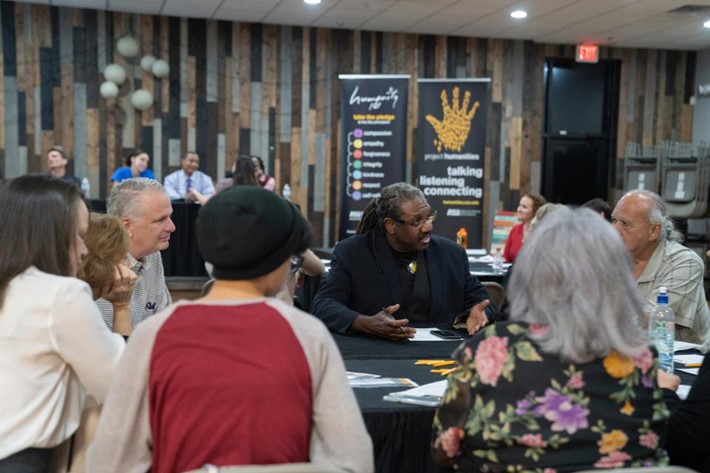 Neal Lester (center), director of ASU Project Humanities, speaks with attendees at a discussion called "The Bell That Tolls: A Conversation on Death and Dying." Photo by Marcus Chormicle/ASU Now

The notion that one must accept death as part of life in order to fully live was a popular refrain Thursday evening. The Rev. Franklin Evans, medical chaplain and director of emerging ministries and spiritual formation at Central United Methodist Church in downtown Phoenix, who moderated the discussion, called Americans today “a culture of avoidance of death,” citing a host of euphemisms we use to refer to it, such as kicking the bucket, biting the dust, passing away, departing and being laid to rest. 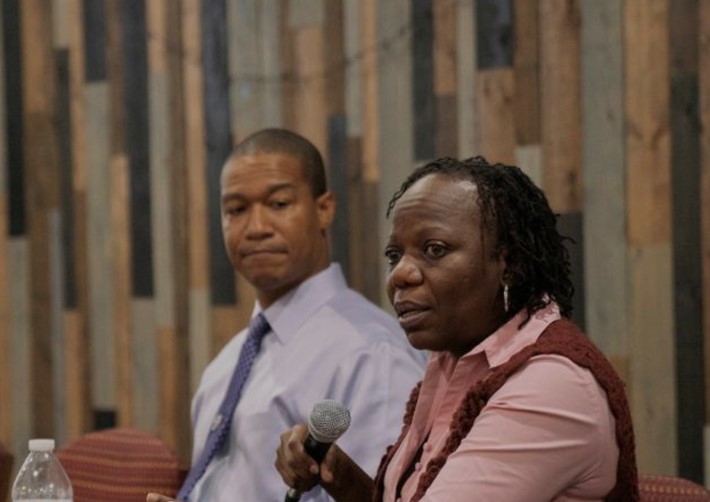 Rose Takyuka-Johnson, a social worker with Hospice of the Valley, speaks at "The Bell That Tolls: A Conversation on Death and Dying." This conversation was made possible by ASU Project Humanities. Photo by Marcus Chormicle/ASU Now

Fifteen-year Hospice of the Valley veteran Rose Takyuka-Johnson only proved his point when explaining her history with death, catching herself after saying her parents had “passed away.”

Takyuka-Johnson was born and raised in Uganda, a place where death was considered spooky, surrounded by myths and legends.

“Growing up as child, I was terrified of death,” she said. But after moving to America and becoming a hospice worker, she “learned quickly that it’s not spooky and it can be a beautiful thing.”

It can also be painful. Chandler Fire Department Battalion Chief Keith Welch talked about the “raw emotion” he sees as a first responder.

“You feel that,” he said. “But you have a job to do. I think we build walls to protect ourselves because if you don’t, it can really affect you long-term.”

Thursday marked the second anniversary of a murder-suicide in which a man drove his estranged wife and their three children into Tempe Town Lake, killing them all. Jeff Glover, Tempe Police Department commander of criminal investigations, said he knew of at least two of the first responders to the scene who were still grappling with PTSD and pointed out that the suicide rate of officers and those in public-safety professions has been on the rise in recent years.

“It’s a cumulative effect,” he said. “They’re dealing with a lot of heavy baggage.”

Fortunately, many police and fire departments nowadays have a team of peers or counselors on hand to help first responders cope and talk through their experiences.

And just being comfortable talking about death is half the battle.

Angelica Lindsey-Ali, a social worker for HIV and AIDS patients, said she was surrounded by death and dying from a very young age, having grown up in Detroit, and that she talks to her kids about it all the time.

“I’m morbid mommy,” she said. “But I want them to be prepared. I told my 5-year-old daughter that one day I’m going to die, that we’re all going to die. She started to cry, but I said it’s OK, I’m here now and I’ll always be with you in your prayers.”

A Muslim, Lindsey-Ali believes in the prophet Muhammad’s teaching that people are asleep, and when they die, they wake up.

There are also practical concerns about the consequences of avoiding the topic of death. If a loved one suddenly dies without a will or any instructions about whether they want to be buried or cremated, for example, family members have to make those decisions themselves.

Evans recommended Googling “Five Wishes,” a tool that can help to prepare what is called an advanced directive; basically a guide for how you’d like to experience death that can detail preferences from whether to use life-sustaining methods like feeding tubes to what color coffin you want.

In Muslim culture, Lindsey-Ali said, a body must be buried within 72 hours. As a result, she said, “You’ll find 21-year-old Muslims with a will.” But it’s not viewed as morbid. She makes it a priority in her line of work to research how different cultures and religions prefer to handle death, “because we want to make sure people die with dignity and in the way they deem appropriate.”

Evans added, “When we talk about death (and make sure it’s understood how we want to deal with it), it frees us up to enjoy time at the end of life and make those last days really count.”