PHOENIX — During her first State of the City address, Mayor Kate Gallego announced the fire department is on its way to making Phoenix a dementia-friendly city.

With the number of people with the condition expected to grow 45% by 2025, the department has already seen an uptick of dementia playing a role in its calls.

“Dementia is a growing health crisis in our community,” Gallego told KTAR News 92.3 FM on Friday. 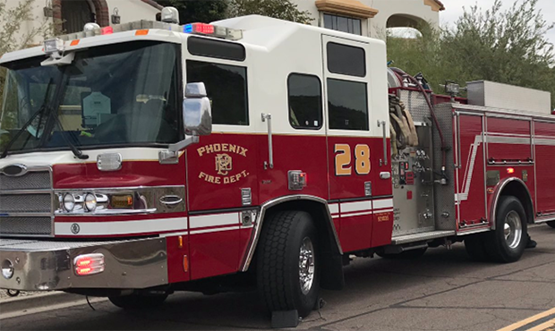 Most of the people with dementia, 80%, live at home. That means oftentimes our firefighters are called upon to assist people when things go wrong.

“We want them to have the best training possible and understand and recognize the symptoms.”

Phoenix Fire Capt. Benjamin Santillan is one of the leaders of the training that is being implemented department wide.

“Unless you walk into those shoes and understand what that individual is going through, you truly don’t understand how important it is to have patience and be calm, using that approach,” he told KTAR News on Friday.

With 1,700 Phoenix firefighters already trained in dementia, they hope to better treat some of the most vulnerable and misunderstood in the community.

“We decided with Hospice of the Valley to use their simulation of sensitivity,” Santillan said.

“We are placing our members in a situation of having dementia – that’s just simple ear phones, taking away a part of their vision.”

The training also includes communication techniques so firefighters can gain details about patients who could be shaken up while also having a larger underlying health condition.

Santillan has dedicated much of his time to constructing videos that will be sent department wide as a teaching tool. The videos will consist of simulations with families of loved ones who suffer from dementia as well as the patients themselves in different scenarios.

The city hopes these videos, training, and the raised awareness will help lessen the stigma that goes along with the disease.

Santillan knows firsthand the heartache it can bring.

“This will touch almost everyone, at some point,” he said.

“The disease is impressive,” he said. “It is sadly impressive to see what it can do to someone you love. But if firefighters can see it firsthand themselves, we can provide even better treatment.”