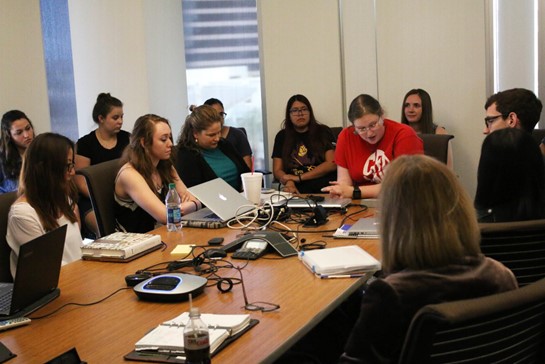 Photo by Jack Winn | The State Press
Students discuss their interactions with patients in Intro to Dementia and Alzheimer's Diseases on ASU's Downtown Phoenix campus on Wednesday, April 25, 2018.

ASU now offers two classes that focus on dementia, Alzheimer's and hospice and palliative care. The classes aim to break the stigma surrounding dementia and will give students firsthand experience in specialized healthcare.

Within the College of Health Solutions, Intro to Dementia and Alzheimer’s Disease was offered in fall 2017 and spring 2018. The class specializes in exploring the diseases with help from medical professionals.

Intro to Hospice and Palliative Care will be offered for the first time this coming fall and will focus on care for people with limiting diseases in a broader sense, allowing students to work directly with patients battling diseases beyond Alzheimer's and dementia.

Palliative care caters to people with limiting illnesses who may not be at the end of their lives but still require some form of assistance and comfort care.

Vicki Hochstetler, a contractor for Hospice of the Valley, said a unique aspect of these classes is that students spend four hours each week working with patients outside of the classroom.

“Most of the care, obviously, that's given in our healthcare system is focused on curing, and hospice and palliative care are focused towards when there isn't a cure,” Hochstetler said. “We're hoping to expose students to a different way that care is provided.”

Gillian Hamilton, the professor of Intro to Dementia and Alzheimer’s Disease and the medical director at Hospice of the Valley, said that in exposing students to people in need of palliative care, she hopes she can help break the stigma that surrounds dementia.

“People are ashamed of it in a way that they're not ashamed of cancer or heart disease or lung disease,” she said. “I want that to go away.”

Hamilton said the first semester the class was offered it had 12 students, and this semester it was capped at 20 students and filled up within a week.

Any student of any major can take the classes, and she said she has seen students and patients develop close relationships through the time they spend together for class.

The students try to find activities that the patients enjoy like playing dominoes, going for walks, making floral arrangements or listening to music. This semester, Hamilton said, she added new projects for students. For example, one group is writing poems for their patients.

The reactions from the students were powerful, Hamilton said.

Annie Schmidt, a biochemistry and mathematics junior, said in her end of the year class survey that visiting patients "empowers" students.

"End of life care is so moving; we get to be present at the most trying and most important times of life," Schmidt said in the survey. "Superficial conversation is replaced with truly meaningful conversation."

As part of his internship, Zaldivar spends time weekly at Ryan House working with kids and at Friendship Village with seniors who require assisted living services.

Zaldivar said that before medicine he was studying business and engineering, but the class made him realize that the medical field was right for him.

While taking care of those with limiting diseases can be difficult and emotional at times, he said he is well suited for the job and wants to go into family medicine after graduation.

“I'm just one of those people who loves taking care of other people,” Zaldivar said. “It's rewarding overall, especially when you're working with dementia patients.”

He said his favorite part of the class has been making friends and networking. With a busy schedule and not a lot of downtime, he considers the time he spends with patients and kids to be much more than a class requirement.

“It gives me a time to breathe,” Zaldivar said. “It's not just a class, it's like vacation for me.”