Whether it's Hungarian paprika chicken, sausage lentil soup or Brussels sprouts with pickled onion, Mark Adinolfi loves to try new recipes. He is happiest feeding his passion: whipping up gourmet dishes for his wife, Jeanne, and daughter, Sophia.

But in January 2016, Mark was diagnosed with ALS, a type of muscular dystrophy sometimes called Lou Gehrig's disease. At first, Mark noticed a loss of strength in both hands. As his condition progressed, he was no longer able to prepare meals — even though his heart longed to be in the kitchen, chopping, dicing, sauteing. 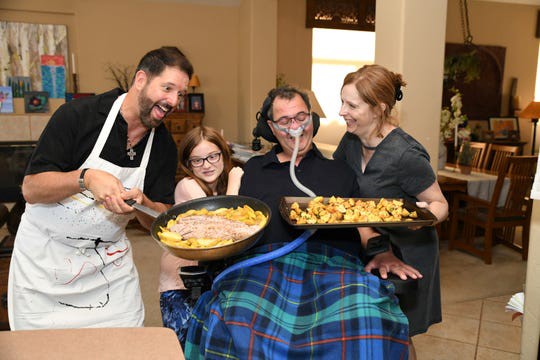 "Because of ALS, I can't provide other things as much," Mark explained, "but I still wanted to spoil my wife, who appreciates good food."

Thanks to a marvelous assistant, Mark is still a chef. Hospice of the Valley volunteer Jeff Riddle has become Mark's hands. Though he calls himself "a reluctant cook," Jeff dutifully executes the detailed instructions Mark gives from his motorized wheelchair — from sprinkling Aleppo Turkish pepper on potato slices to slicing apples to just the right thickness.

"This disease isolates me. But a wonderful guy comes into my life and sometimes when he shows up, I say, 'Dude, we're cooking whatever falls out of the fridge,'" Mark said with a laugh.

"Cooking and sharing a meal with Mark and his family is the BEST THING THAT I DO," Jeff said with passionate emphasis. "We improvise a lot due to his prowess and it always tastes amazing!"

Every Friday, the Adinolfi kitchen is filled with laughter. The weekly ritual is something both men, now fast friends, anticipate with excitement. They tease and joke as if they've always known one another. Sophia even decorated an apron for Jeff. The 11-year-old inspects the meat to make sure it's brown enough before going in the oven. A beaming Jeanne sets the table, savoring the happy noises and the tantalizing smell of caramelized onions.

About an hour later, dinner is served: beautifully roasted pork tenderloin with green apples and rosemary potatoes. The meal is perfect.

But it's not really about the food. 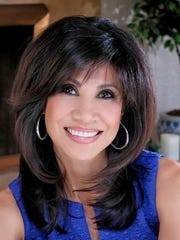