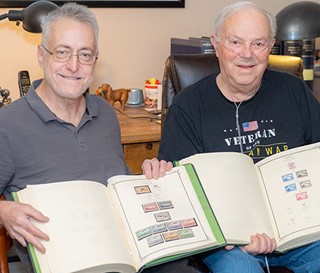 It was 1939, and Monroe Wingate was just 9 years old when his father returned home from a business trip with a little package of German stamps.

Two of them depicted an eagle circling the world with a swastika. Hitler’s invasion of Europe was all over the news and the young boy knew he was holding a piece of history.

Over the last 81 years, Monroe has cataloged 962,000 stamps using a software program that helps him keep track of what he has. But he is only halfway through his collection. “Honestly, I never met a stamp I didn’t like,” the 90-year-old chuckles. “Some collectors specialize in butterfly stamps or something. But I love them all and that’s my problem.”

Stamp collecting may have begun as a hobby, but now it’s his life’s work. “Every stamp tells a story,” he said. “Commemorative ones celebrate statehood, for example. Others are pieces of art. They all have variations in watermarks and perforations. To me, every one of them is a miniature painting.”

After respiratory illness reduced Monroe’s mobility several years ago, he “gave up sailing and golf,” his wife Peggy said. “But he’s never, ever bored! He can sit for hours studying stamps, storing them in albums or deciding which ones to bid on in auctions.”

When Monroe’s Hospice of the Valley social worker, Thomas Corrigan, saw the extensive collection in the couple’s Scottsdale home, he felt compelled to introduce his patient to someone who would truly appreciate his passion for stamps.

“I just knew he would enjoy sharing what he’s been working on for decades,” Thomas said. Which is how, one sunny morning, Monroe met Kevin Lesk, president of the Phoenix Philatelic Association, who was duly impressed. “This is a wonderful — the sort of thing you rarely encounter! Monroe is the epitome of a true collector who’s in it for the enjoyment and collecting for the love of it.”

The camaraderie was instant. Both men paged through heavy volumes holding hundreds of colorful stamps from faraway places. Some mark world events like the Olympic Games; others feature Hollywood Legends or capture pieces of history like the trio of Graf Zeppelin stamps. That particular set was issued for letters that the airships carried to Europe in the 1930s.

“When people share their collections,” Kevin said, “their stamps educate us — about the past or current events or art or culture. It’s a hobby for anyone who is curious about the world. And collecting isn’t just for the rich… it’s available on any budget.”

Enthusiasts and serious collectors alike will be attending the Aripex Stamp Show, Feb. 18-20 at the Mesa Convention Center. This year, 47 exhibitors will be displaying their collections.

For details, visit aripex.org. Kevin will even be there giving free appraisals to anyone who is wondering what their stamps may be worth.

Monroe won’t be at the show this year, but he’s already looking forward to Kevin’s next visit. “I love being able to share my collection,” he said softly. “I wish more people did it.”