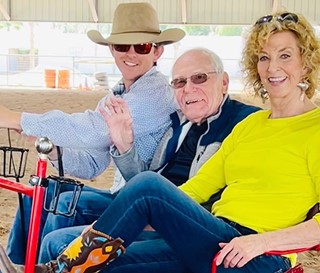 Hunkapi Farms encourages you to “open your heart,” using the bond between horse and human as a catalyst for positive growth.

As a hospital chaplain, community mentor, teacher and volunteer, Earl Cooper was known for his compassion for those in greatest need.

“His second love was horses,” Hospice of the Valley social worker Samantha Teddi Deetz said of her 83-year-old patient.

Earl competed in roping for many years and later volunteered at the nonprofit Hunkapi Farms in Scottsdale, supporting its mission of caring for children and adults through equine therapy.

“When exploring what he might look forward to doing now, he shared he’d love to go see some horses again,” Samantha recalled. “We worked with the amazing DreamCatchers club at Mountain View High School and were able to put together a beautiful morning in April at Hunkapi Farms, where he could meet and feed the horses.”

Accompanied by Samantha, Hospice of the Valley nurse Gina Day and his wife, Penny, the affable Earl was greeted with his favorite Starbucks hot caramel latte and treated to a VIP tour of the farm, a 7-mile drive from his assisted living home in Scottsdale.

“To honor his volunteer work, the Hunkapi team granted him the incredible privilege of riding in the horse buggy in the arena,” Samantha said. “His smile was bright and wide as he took several laps around the arena with everyone cheering him on!”

Gina, too, was emotional about the whole experience: “It was such a privilege to be able to go with Earl to Hunkapi Farm and watch him interact with the horses. You could see the sparkle and joy in his eyes!”

When Gina visited him a few days later, Earl was still beaming. “I had a wonderful time!” he told her, humbled to see so many people come together to make his dream come true.