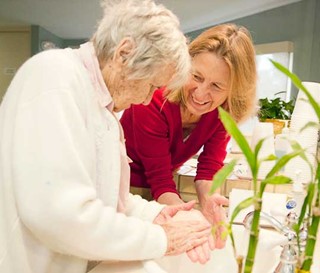 Dementia is simply a decline in cognition interfering with daily functioning involving one or more areas: learning and memory, language, executive function, complex attention, perceptual-motor, and social cognition. It is unusual that a patient will come to you complaining of a decline in memory – more often a family member or friend will bring them in, having noted a decline. It is worth noting that a common cause of memory loss is depression.

As a primary care physician, it’s important to first get the patient’s history and do a basic physical exam, focusing on focal neurological deficits (may indicate stroke), or parkinsonism (cogwheeling rigidity, tremors which may indicate Lewy body dementia). Most persons with Alzheimer’s disease (AD) have no sensory or motor deficits early in the disease.

Causes of dementia include Alzheimer’s disease (60%+), vascular dementia (more common if hypertension and/or diabetes), dementia with Lewy body, frontotemporal dementia, and other less common causes. More recently, “brain fog” from COVID-19 in the elderly has been diagnosed, distinguishable by sudden, rapid decline in cognition.

Next, do a brief screening test.  Ideally, this will be a MMSE (mini-mental status exam) or MoCA (Montreal Cognitive Assessment – better to detect early dementia or Mild Cognitive Impairment) which you can do yourself or teach someone in your office to administer. Most offices do not have time for this, so a very brief screen can be done, such as asking date (day, date, month, year), name 3 objects (e.g., “book car house”), ask them to spell world backwards, and then ask them to tell you the 3 objects. This may pick up some deficits that are not visible in social conversation.

A very basic lab workup (as recommended by American Academy of Neurology) is B12, CBC, and TSH, with other labs, only if there are indicators. AAN recommends CT without contrast or MRI, but other guidelines only suggest these if there is atypical presentation. You also want to rule out reversible causes. The most common are depression and medications (including OTCs). A simple validated screen for depression is the Depression Short Patient Health Questionnaire (PHQ-2), which asks whether, over the past two weeks, the person has been (1) showing little interest or pleasure in doing things; and/or (2) feeling down, depressed, or hopeless. Of course, depression can co-exist with dementia, but treating depression is important. Reviewing medications, particularly minimizing anticholinergic drugs and any unnecessary polypharmacy, is also important.

At times, delirium, which is potentially reversible, can be confused with dementia. Delirium is defined as an acute or subacute onset of confusion, and is often due to drugs, toxins, infections, or organ disease. Delirium can be distinguished from dementia by acute onset, fluctuating course, inattention, disorganized thinking, and altered level of consciousness.

Once you have a probable diagnosis of dementia and have ruled out reversible causes, you can refer to a neurologist, ideally a group that specializes in Alzheimer’s disease and other dementias. Referral is not essential if the diagnosis is clear, and you and the family have no current questions.

Now comes treatment. Currently, as you know, there is no medication to cure Alzheimer’s disease. Medications prescribed to treat Alzheimer’s disease and some other dementias are the acetylcholinesterase inhibitors (AchEIs): donepezil (Aricept), rivastigmine (Exelon), and galantamine (Razadyne). These medications increase the level of acetylcholine (Ach) in the brain. In multiple studies and reviews (most recent Fink et. al., Ann. Int. Med 2020), they have been shown to produce a slight reduction in short-term cognitive decline in some patients, “but differences vs. placebo were of uncertain clinical importance.” There was no change in functioning at home or delay in placement. Memantine had inconsistent benefits when added to the AchEIs in moderate-severe dementia. Unfortunately, the AchEIs do have side-effects: one to watch for is gastric distress (including diarrhea and nausea), which persons living with dementia may not be able to express except by eating less, so this should be monitored.

The newest medication, aducanumab (Aduhelm), approved by the FDA against the advice of every member of their scientific advisory committee (some of whom resigned in protest), was studied in two clinical trials. In one trial, low-dose had no effect; high-dose showed MMS 0.5 points higher (out of 30) than placebo after 18 months. In the second trial, there was no significant effect of the Aducanumab at any dose. The approval was therefore based on a reduction of amyloid plaques in the brain by 60% after 18 months, despite no clinical difference. Toxicity was high (brain swelling, confusion, dizziness, falls, etc.) and cost is high: it is given by an IV infusion monthly at a cost of $4300/dose, or $56,000/year.

Treatment of behaviors in persons with dementia is another topic: no medication has been approved by the FDA to treat behaviors such as physical aggression, hallucinations, delusions, paranoia, outbursts, and wandering in persons with dementia. Antipsychotics are used off-label when essential to manage aggression and psychotic symptoms; SSRIs such as citalopram (Celexa) are sometimes effective for agitation, but each situation is different. The goal is to first treat behaviors with education, approach, and environmental adjustments.

It can be challenging to do extensive dementia education in a primary care setting. The Supportive Care for Dementia program, offered by Hospice of the Valley at no cost with a federal grant, currently serves 450 patients with all levels of dementia with an Educator (social work or counseling background) visiting in the home and following up with virtual visits for 5 months, and nurses and MD 24/7 phone support (may suggest possible medications to PCP, but no prescribing). These Dementia Educators help families navigate the journey from a new diagnosis to later issues by completing a cognitive screen (MMS and/or MOCA), teaching approach, completing advance directives, providing resources and placement options, and providing caregiver support. Such service, whatever its source, is essential for families navigating this challenging path.