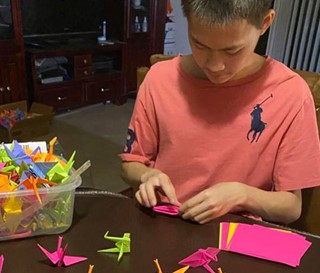 A Gilbert high school student could have folded on his volunteer work when the pandemic hit, but instead he folded hundreds of origami cranes – and won a national award for it.

Charles Zhang, a 17-year-old student at Hamilton High School, has volunteered at Hospice of the Valley since February 2019, the nonprofit’s teen volunteer coordinator Laurence Sinn said.

When the pandemic hit last spring, “we couldn’t send any volunteers, adults and teen volunteers, into facilities” due to safety concerns, Sinn said.

Not one to be stopped by this setback, Charles said he “really wanted to still become a part of this Hospice of the Valley community,” so he created the Wishing Crane Project.

Once they’re created, he said, “family members can write these messages on the origami paper cranes, and then the hospice staff members deliver them to each of the locations, and then these hospice patients can see the messages from their loved ones.”

Charles figures he has made over 1,500 cranes since he started the project last summer. He encouraged others to join as well.

“Me and two other volunteers, we created this video in order to attract more teens who were willing to become part of this project,” Charles said.

He said the video showed a “step to step process of how to fold an origami paper crane,” as well as how to “organize these cranes, in order to make it look as decorative as possible.”

“These hospice patients really appreciated it since they were able to communicate with their family,” while visiting in-person has been prohibited, he said.

Sinn said Charles’s work has been “so refreshing,” and has done wonders for the Hospice of the Valley teen program.

“He saved the teen program because he pushed me to be motivated and come up with other stuff.  And it’s been so successful, the teens have been more engaged than ever,” he said.

Charles said he felt “really happy,” that he was “able to create a large change inside the community,” when he “initially thought that I wouldn’t be able to do any volunteering” when the pandemic began.

The annual award is presented “to one student from each state and the District of Columbia who demonstrates the American spirit in his or her community,” the museum website says.

“I was really stoked when I found out I won this award since I was able to not only create an impact in the community, but also get recognized for what I’ve done to help other people,” Charles said.

Charles’s volunteer efforts through the pandemic haven’t stopped with the Wishing Crane Project.

Charles said last summer, when “cases in Navajo County, Arizona, were surging extremely high,” he used his position as the Hope Chinese School Student Council president to start a fundraiser for the county.

It raised over $5,000 to provide personal protective equipment for Navajo County, Charles said.

Charles said his efforts didn’t end with raising the money and that “it took two or three more weeks of endlessly contacting and negotiating with these managers, and I was finally able to buy dozens of hand sanitizers and masks for these Navajo County people.”

Charles said he helped create another fundraiser where “we raised over 100 books and games,” to entertain Navajo County children during a “three-day complete lockdown” due to the pandemic.

Sinn said that before the pandemic, Charles was assigned to volunteer at the Enclave at Gilbert Senior Living Memory Care Center.

Charles said he would help patients with dementia “with daily activities, such as card games, bingo, horse races,” among other things.

Charles enjoys working with elderly patients because “I can learn a lot from them, while I also help them at the same time.”

“I’m always inspired to help out the community since one of my dream jobs is to become a doctor,” Charles said.

“I really like helping out people,” he added. “Whenever I help out people it makes me feel really happy, to be able to give back to the community and also see these other people’s lives improve.”