A year ago, Hospice of the Valley invited a group of 15 people to participate in a fellowship program in which they came up with ideas that could improve care for people living with dementia. One of those fellows was a Phoenix Fire Department captain.

Today, Dan Daley is a retired Phoenix fire captain. When he was selected to participate in the fellowship his goal was pretty straight forward: educate Phoenix firefighter paramedics about dementia. 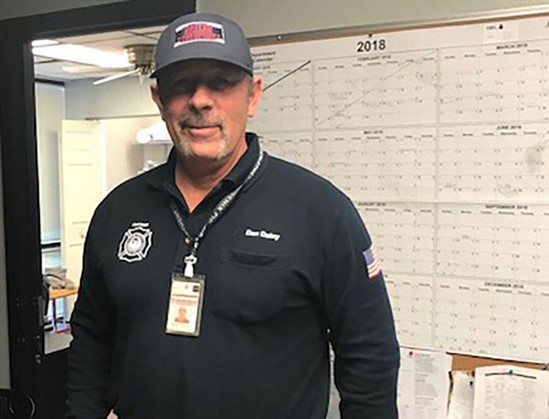 "What I found when I was working at Phoenix Fire EMS, was that there was a little bit of gap ... that we could do a little bit more education to deal with these emergencies that happen with these dementia patients," he said.

So, crews were going out on calls and walking into homes or long-term care facilities only to find a situation made worse because the person had dementia. That person might become disoriented or unable to explain what hurts; they might act out or become violent, and that’s why Daley wanted to create a formal training program, along with Hospice of the Valley and other first responders.

The woman in a new 11-minute training video has fallen in supermarket parking lot. She has hurt her knee and first responders are trying to assess the situation.

It's clear, something is not right. So the first responders have to rethink how they're going to treat the woman. This is exactly the type of scenario Daley or his colleagues would walk into.

So, the first responders in the video remove their sunglasses. Nathan gently approaches the woman and sits next to her. He introduces himself and his colleague, Bob. They take their time. And eventually, the woman begins to open up and allow medics to treat her knee. 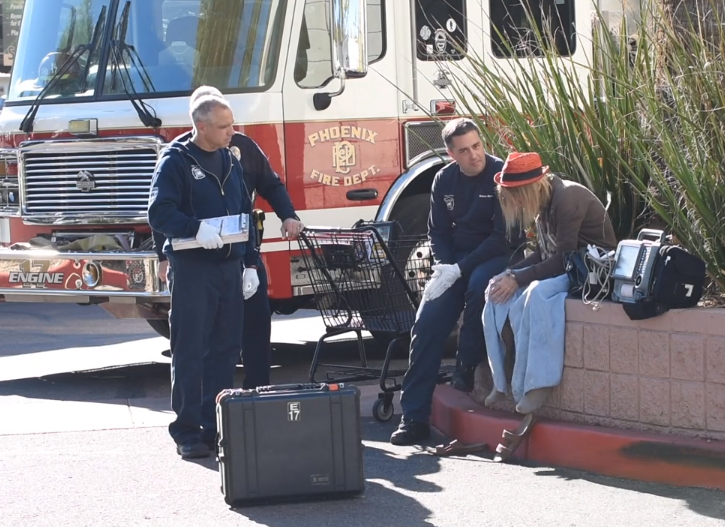 Phoenix first responders helps a woman in a training video.

"So, it’s very realistic," said Lin Sue Cooney, the director of community engagement at Hospice of the Valley. "You can get takeaways and learning points very easily and some of them aren’t very obvious."

"It's OK. We just want to help you out and make sure you're safe."

"Just introducing yourself by your first name, talking to the person by their first name, using a calm voice, reassuring them constantly, 'It's going to be OK, I just want to make sure your safe. My name is Jon. What's your name?'" said Cooney. "All of those things are just kind and compassionate but they resonate with someone who is not sure about the world around them."

And In Arizona, there are currently about 140,000 people living with Alzheimer’s disease, according to the Alzheimer’s Association. And that figure doesn’t include other types of dementia.

That’s why these videos are so important, says Phoenix fire Captain Benjamin Santillan.

"We as first responders, just getting training on what to recognize and what to look for is extremely important, but this population is increasing dramatically," he said.

But the ultimate goal, says Santillan, "is to have everybody in the Phoenix Fire Department, so we’re talking over 1,500, close to 2,000, members certified in dementia care."

Which means Santillan will become a certified Alzheimer’s disease and dementia care trainer and a certified first responder dementia trainer. He’s also picking up where Daley left off.

"And that’s creating additional videos, especially that caters to us when it comes to medications," he said. "There's a lot of times we go out to someone’s house and they’re placed on so much medication that it causes other things to happen such as diarrhea and nausea."

Santillan knows all of it — the videos, the training, an increasingly older population — is going to take a tremendous effort.

Because dementia will touch almost everyone, at some point. It already hit home for Santillan.

"So, my grandmother who just passed, she passed a couple weeks ago, she had Alzheimer’s disease. And my other grandmother, she has Alzheimer’s and vascular dementia, as well."

And it’s this personal heartbreak that in some ways drives Santillan to figure out ways that will hopefully improve outcomes for the patients they treat.

"Even though as first responders we like to get in take care of the issue, take care of the challenge, fix the problem," he said. "But we all know with dementia, we can’t fix it. But we can understand it."

And sometimes when you’re on the other side of that door, waiting for those first responders to walk in, that’s the only thing you need — understanding. Not blame or shame. But someone who can serves as resource or simply reassure you that it's going to be OK.

Listen to the Story