The World Health Organization estimates roughly 47 million people worldwide are currently living with dementia. By 2050, that number is expected to almost triple.

John O’Donnell, 77, of Sun City, Arizona, has been living with dementia for the past seven years.

For the last few months, Arizona State University health sciences undergraduate Arbella Yousif has been visiting him and his wife, Karen, once a week for a few hours as part of a recently introduced course on dementia at the College of Health Solutions.

During their visits, O’Donnell and Yousif play cards, work on puzzles, listen to music and go for walks. And every Monday, Yousif takes O’Donnell to his voice class.

You might call it a win-win-win situation: Yousif gets the uncommon experience of working directly with a dementia patient while still an undergrad, O’Donnell gets to engage with someone new and his wife gets much-needed time to take care of herself.

“My husband told me it’s so nice to have a young person around. Her energy and enthusiasm is just so great,” Karen said. “For a while, it really hasn’t been safe for me to leave him on his own. So this semester with Arbella here, I said, ‘OK, I’m going to get my physical, I’m going to go to the grocery store, I’m going to get all these things done.’ 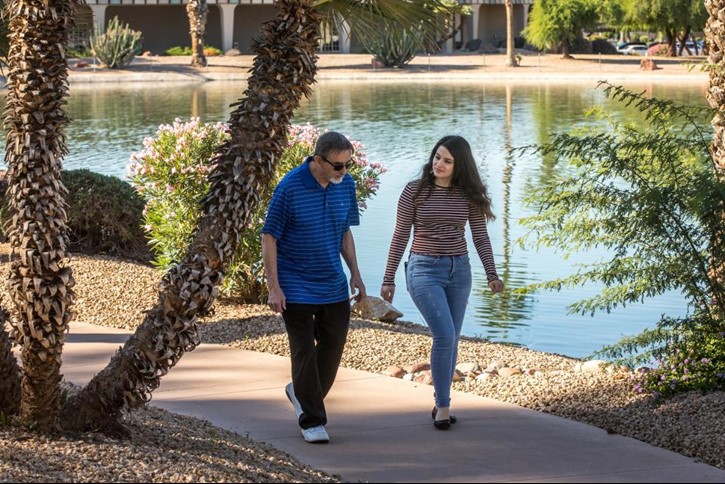 John O'Donnell and Arabella Yousif go for a walk during one of the ASU student's weekly visits. Photo by Charlie Leight/ASU Now

Preparing caregivers for the future

“We’re finding it’s not very common; people aren’t that excited about it,” Hamilton said. And that’s unfortunate, considering the need to train the next generation of health care workers to meet the needs of such patients is great.

“No matter what, they’re going to meet these people, and we want them to understand them and care about them,” Hamilton said. “And right now, there aren’t many chances for students to have direct care with those kinds of patients. So this is a chance for them to really spend time with a patient and their family. And it changes them.”

Throughout her time with O’Donnell, Yousif has learned to be patient and “bring joy into his life by just letting him be himself … and I slowly started learning who John really is. … He is a man with humor, knowledge and love in his heart for everyone who is around him.”

The most important lesson she learned, though, was that “everyone deserves to be treated equally and at high standards until their last day on this Earth.”

The merging of humanities and health care

Last semester, Hamilton, who also serves as administrative medical director of Hospice of the Valley, collaborated with ASU English Professor Mark Lussier and College of Health Solutions Clinical Professor Alison Essary to implement something called bibliotherapy in her dementia course.

Lussier describes bibliotherapy as the use of literature for therapeutic reasons — basically, reading aloud to a patient particular pieces of literature thought to ease stress. It’s one of the cornerstones of a project he and Essary embarked on in 2013 after a chance meeting at ASU President Michael Crow’s annual academic assembly.

Despite the apparent disparity between their fields, they struck up a conversation about the potential of injecting humanities into health care.

“That’s sort of typical for ASU,” Lussier mused. “‘Hi, we’re in different fields but we have shared interests; let’s do this.’ And the more we talked, the more we realized there may be ways that the humanities can actually enter into certain spaces in medicine to help relieve stress for patients and help relieve burnout in the workforce.”

The pair attended a conference at the University of Oxford where they presented on narrative medicine. It was well-received, as was a similar presentation they gave the following year.

That’s when they decided to put their ideas to the test pedagogically and created a summer program in Florence, Italy, in which students explored medicine through the lenses of art and literature.

Based on the success of that program, Lussier and Essary introduced a cross-campus initiative at ASU over the past year to develop and launch a health humanities certificate, available through the Department of English and open to all students.

After the certificate launched, Lussier found himself back at Oxford, where he had a fellowship, and discovered scholars there were also looking into humanities-based interventions in health care, particularly bibliotherapy.

Provost of Worcester College and Professor of English literature at Oxford Jonathan Bate and his wife, Paula Byrne, an internationally acclaimed literary biographer, had together co-edited the anthology “Stressed, Unstressed,” a collection of poems by writers such as Shakespeare, Emily Dickinson and W.B. Yeats considered well-suited for use as a tool to ease the mind. The poems can be used in diverse spaces, including medicine.

Essary and Daniel Hall-Flavin, director of Mayo Clinic Center for Humanities in Medicine, joined Lussier at Oxford, where a three-and-a-half-day “energetic exchange of ideas” among the scholars resulted in the creation of the Applied Humanities Alliance, a collaboration between ASU, Mayo Clinic, Hospice of the Valley and Worcester College, Oxford University.

The alliance describes themselves as “an innovative think tank established to create actionable solutions for wicked problems in education, training and practice for caregivers in hospice and palliative care.” 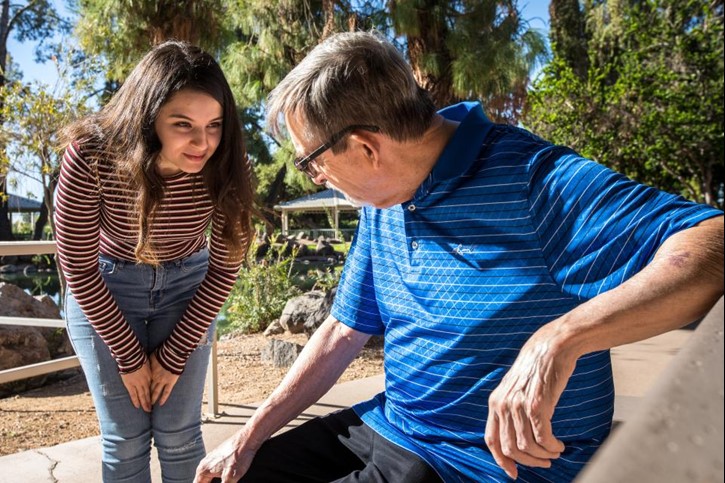 Arabella Yousif (shown with Sun City resident John O'Donnell) says the experience in ASU faculty associate Gillian Hamilton's class has had a major impact on her. She plans to apply for similar internships in her senior year. Photo by Charlie Leight/ASU Now

Good for the patient and the caregiver

And the future of health care does face some wicked problems.

“There is what we call the silver tsunami,” Essary said, referring to the potential health care crisis brought on by a large aging population. “And we have an insufficient number of health care workers to serve that population. So part of what we see as our role is engendering a kind of love and an interest in working with that population among our students.

“And also, because of the insufficient workforce and the demands on the current workforce, there’s a burnout epidemic. So we’re also trying to identify what type of scalable interventions can be implemented within this type of setting to offset those stressors, whether on an individual level or on an organizational level.”

The alliance’s one- to three-year goals include: training transdisciplinary undergraduate and graduate students through experiential opportunities; convening a team of physicians, health care professionals, scholars, patients and family members to identify evidence-based strategies to burnout; and designing and implementing web-based modules for both caregivers and patients in the core competencies of hospice and palliative care.

As part of the first goal, Lussier and Essary worked with Hamilton to incorporate bibliotherapy into her dementia course for the spring 2018 semester, utilizing the “Stressed, Unstressed” anthology.

Hamilton thought it was particularly beneficial for the students because it “helps them look more closely at the patients and see them differently.”

During the fall semester, the alliance looked at the effectiveness of bibliotherapy on increasing empathy and relieving burnout when used by professional caregivers at Hospice of the Valley and Mayo Clinic Rochester. They measured it against applied mindfulness techniques. There was also a control group who received no intervention. Researchers are currently analyzing the results.

Lussier and Essary have received several grants to fund research and expansion of the alliance, including the Gonda Grant, an internal grant within Mayo Clinic’s system, and a seed grant awarded by the College of Health Solutions.

Lussier envisions a future where patients are given a regimen that instructs them to “do this exercise, take this prescription and read these three pages.”

The hope is that the alliance serves as an infrastructure to research, educate and implement humanities-based interventions in medicine to reduce burnout and attract more people to the field.

Yousif had very little knowledge of dementia before taking Hamilton's course but now plans to enroll in an internship during her senior year just so she can get more experience in the area.

“This class has changed my life forever and that, I am sure of,” she said.