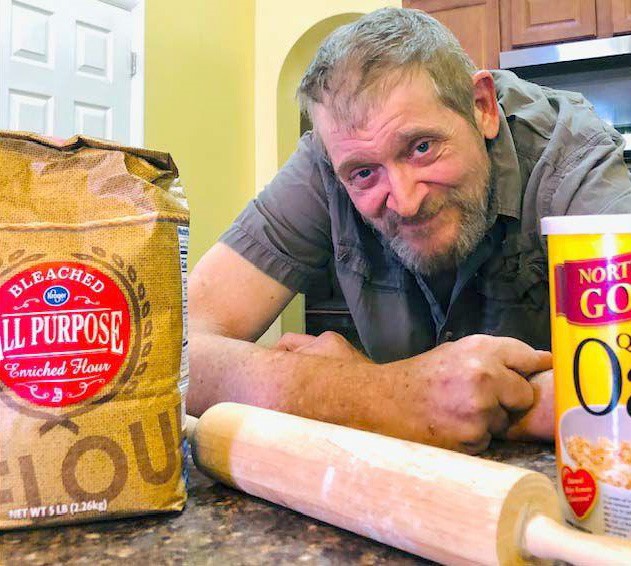 Steve Sturtz darts across a spacious kitchen of his Everlasting Community Services home in Ahwatukee, grabbing a bag of flour, oatmeal, peanut butter and a rolling pin.

“Wait. I may have some dough in the refrigerator,” he says, quickly changing direction.

Sturtz makes the treats for Hospice of the Valley’s Pet Connection therapy dogs. When the organization’s Pet Therapy teams make weekly visits, patients offer the treats to the canines as a thank you for tail wags and visiting.

For the last three years Sturtz, 60, has lived with other men in a house run by Everlasting Community Services, which offers more than 70 individuals with traumatic brain injuries in 10 homes across the Valley 24-hour monitoring and supervision by certified trained staff members.

Everlasting’s Activities and Volunteer Coordinator Kathy VanDerworp contacted Hospice of the Valley to inquire how their residents could volunteer their time and talents to patients.

“I think when people feel needed, they feel better about themselves,” VanDerworp says. “Steve takes pride in his work, and the difference in him is remarkable. He is much better mentally. He has more focus.”

“I visited with Steve and learned he had experience as a chef,” said Noellen Rivers, Hospice of the Valley fundraising and volunteer coordinator. “I actually tried to make the dog treats myself, but it was too hard. I offered Steve the job.”

Sturtz flattens the dough with a rolling pin, gently presses his dove- and heart-shaped cookie cutters into the watered flour and oatmeal mix and then bakes them in a bread machine.

He estimates he’s made thousands of dog biscuits in the last year.

For Sturtz, it’s a way of giving back to others in a recipe of eggs, peanut butter, applesauce, oatmeal, effort – and love.

It’s also a way of healing from a violent assault many years ago.

In November 1992, Sturtz, fresh out of the Air Force after 15 years of service, was a bartender at a club in Tucson.

One day a former employee returned to the bar with robbery in mind. During the crime, Sturtz was assaulted with a piece of two-by-four.

The assailant violently struck Sturtz five times in the back of his head and left him for dead. The attacker was caught, tried and convicted of armed robbery.

“I lost most of my memory,” Sturtz said. “I was married at the time. After the assault, I felt out of place at home. I couldn’t remember who they [his wife and two sons] were. I was an outsider living in my house. I felt it better to move along and try to recover and get back on with my life.”

For eight months, Sturtz lived on the streets of Tucson.

He eventually moved to Florida, where he trained to be a chef. Over the years, Sturtz has been in a number of programs to treat his brain injury. Now, he’s also dealing with spinal scoliosis and kidney disease.

“I can’t live by myself again,” he said, holding his rolling pin. “I can’t manage my meds on my own. I can’t keep it straight.”

As another batch of dog treats is nearly done, Sturtz mentions a bucket list item

“I would love to fly in a jet fighter again,” he said with excitement. “I once flew in an F-16 over the waters of South Florida.

“The pilot even let me steer for a while. I know I won’t be able to fly in a jet plane like that again because of my head injury, but if I could I would do it anyway. What a way to go out.”

Finished with his kitchen duties, Sturtz walks into the living room and passes a framed poster on the wall with a simple message: Be Calm and Carry On.