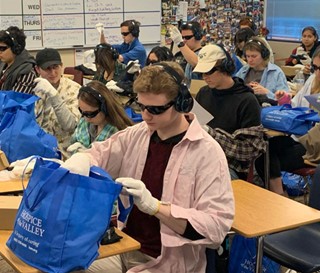 Virtual reality isn’t just for gamers anymore. Doctors who believe it has the potential to create different auditory and visual sensations emulating the sensory experience of those who deal with dementia are also using it.

That’s what Dr. Gillian Hamilton is counting on when she goes to high schools taking along a portable, rudimentary VR system to simulate the mental stresses a patient with dementia can experience. With the assistance from volunteers of the Hospice of the Valley, Hamilton uses the system to show teens what the symptoms of dementia actually feel like.

Dementia is a condition that affects more than three million Americans a year and personally touches the families of many young people. Hamilton, administrative medical director of Hospice of the Valley, has been touring schools in Greater Phoenix for the past eight months – opening eyes and hearts with this unique experience.

For those students with some experience of family members dealing with dementia, the technology hit home.

“I really felt isolated when I was going through it, I can’t really put it into words, it’s just something you have to experience,” Arcadia High School senior Tasi Lerma said. “It’s really eye opening and allows you to see what those patients are going through.”

Students wore headphones, glasses and gloves. This gave them the experiences of aphantasia, difficulty voluntarily visualizing mental imagery, and aphasia, losing the ability to understand or express speech. They were then required to perform simple tasks using the accessories. Suddenly, putting on a shirt and buttoning it became a more complex daily task.

More than half of the class removed the headphones and glasses saying it was too overwhelming and hard to comprehend anything. The simple commands given were drowned out by blaring noises such as dogs barking and sirens.

Arcadia senior Alexander Oihus said that he was surprised at just how frustrating the tasks became under those circumstances.

“It was difficult to see, there was no peripheral vision and everything was extremely blurry, and then hearing the instructions through all the noise was also very difficult,” Oihus said. “I really hate doing anything while I’m wearing gloves too, and I didn’t realize that losing feeling in your hands was a symptom of dementia. That made it tough to button things up.”

Hamilton wants young people to be able to serve the dementia community and sees this as an opportunity to offer teens better coping skills. “I don’t want anyone to leave here feeling hopeless or negative about dementia,” Hamilton told the students. “I want you all to leave feeling like you can help those with dementia, and there’s so much you can all do.”

Although the virtual reality experience was new, the students had previously learned about dementia from their teacher, Darcy Brodison, who normally teaches economics and government courses. She has worked with Hospice of the Valley and been a volunteer at the Memory Cafe events in the Greater Phoenix. One of the most prominent Memory Cafes is hosted by the Jewish Family & Children’s Service.

After the VR experience, Hamilton began a dialogue with the students and focused on different ways to communicate and empathize with patients experiencing dementia. Lerma, who has family members with dementia, said that the VR simulation creates a unique perspective.

“The whole experience made you feel like you really understand what these patients go through every single day,” Lerma said. “(Dementia) is not something you expect to happen and it’s not easy, but you’re certainly not alone and there are resources for you.”

The Dementia Care and Education Campus being built next to Arcadia High School will be one of these resources. It is scheduled to open in 2021.

However, Hamilton thinks that the best course of action is to have more human interaction with patients affected by dementia-related diseases.

“Come by and talk about your boyfriends or girlfriends or what their favorite music is, they would love to hear about it,” Hamilton said to the class. “We need a force of young people who need to love dementia like I do, and I really do hope that I see more of you volunteering.”