Army veteran Chester Dorr has been honored multiple times for his World War II service, including storming the beaches of Normandy in France on June 6, 1944.

But the recognition he received from Hospice of the Valley (HOV) volunteer Rodney Dehmer on June 6, 2019—the 75th anniversary of D-Day—“just tops the cake,” says Chester’s son, Jim. 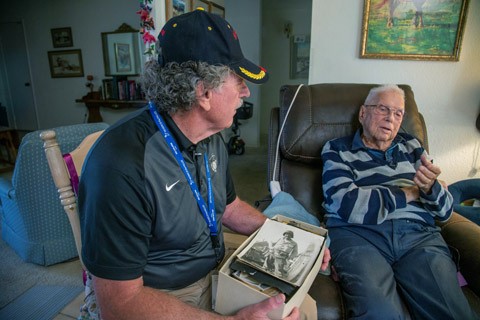 Dehmer has been a part of HOV’s Saluting Our Veterans program since its inception in 2011. Trained volunteers make about 30 tribute visits a month, thanking military veteran patients like 99-year-old Chester for their selfless service and honoring them with a special lapel pin and keepsake flag.

“This is one hell of a program!” Jim says of the emotional ceremony at his dad’s home in Phoenix.

Dehmer, a Goodyear resident, is among 48 Salutes volunteers—all veterans from every branch of the military.

“A vet knows what a vet feels,” points out Dehmer, who served in the Vietnam War, as did Jim.

“That’s right,” Chester chimes in as he lovingly shows off historic photos and WWII memorabilia he brought home from France and Germany.

Every Salutes visit is different, just as every patient is unique.

“They all have their own memories,” Dehmer says.

Chester’s war memories are as vivid as ever. After the Normandy landings, the largest seaborne invasion in history, he remembers being scolded by Gen. George Patton for briefly taking his helmet off. Why? “Because you don’t know what’s going to happen next,” Chester explains.

These special visits give families one last chance to hear stories from the past, and share deeply touching moments. Moments that humble volunteers like Dehmer. “For me to recognize them, it’s a privilege. It’s a gift to me.”

To learn more about this and other volunteer programs at Hospice of the Valley, visit www.hov.org/volunteer, or call 602-636-6336.