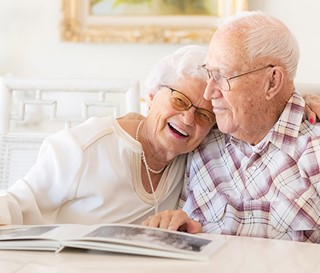 Christiane and Muryl Cole appreciate the support they receive from Hospice of the Valley's Supportive Care for Dementia.

azcentral.com
May 19, 2022
by Christina van Waasbergen

A $25 million campus created to serve a fast-growing population of Arizonans with various forms of dementia has partially opened on 3.2 acres in Phoenix.

Once it's fully open, the "Dementia Care and Education Campus," operated by the nonprofit Hospice of the Valley, will serve as a one-stop shop for dementia support, hospice officials say.

The campus is on 44th Street just south of Indian School Road.

"This certainly sets a precedent for dementia care moving forward," she said.

The campus is a place where members of the public may access dementia care resources and training and it will give people with dementia a chance to participate in social programs, including an adult day club, a "Memory Café" and a preschool that's expected to have opportunities for people with dementia to interact with young children.

"Having a day program that interacts with children going to school, that alone is really unique," McManus said. "The piece we're really excited about as well is the training center. ... Already they've done some trainings for first responders."

Dr. Gillian Hamilton, Hospice of the Valley medical director, said she believes the campus may be the first of its kind in the nation in terms of the level of emphasis it puts on educating people about dementia care.

Arizona has the fastest growth rate for dementia cases in the nation, McManus said. The number of Arizona residents with Alzheimer's disease alone is expected to reach 200,000 by 2025, according to an Alzheimer's Association report.

About 18.2% of Arizona's population, or 1.3 million people, is over the age of 65, compared with the U.S. average of 16.5%, according to a 2019 analysis from the Kaiser Family Foundation. Arizona also is a destination for winter visitors, many of whom are retirees over the age of 65.

“We are already outpaced in the provider community to meet the current demand,” McManus said, “And we’re really about to enter a crisis of care in the coming years.”

Because of that, McManus said, it is important to increase the number of health care professionals with specialized training in dementia care.

Hamilton, who originated the idea for the campus, said she got the idea because Hospice of the Valley had been trying to educate health care professionals about how to care for people with dementia. The only place they had to do that was in their inpatient hospice facility for dementia patients, which cares for patients in the advanced stages of dementia. Hamilton said she realized they needed a place where health care professionals could train in caring for people with all stages of dementia.

"The reality is, this is a growing concern and a major concern for this state and we would really like to see expansion of services like this across the state," McManus said.

'Socialization is a critical piece of dementia care'

“Long-term memory is what dementia patients hold on to the longest, and children are part of that,” Flood said. "So they recall children and they’re uplifting and their laughter is contagious and it brings joy to them.”

Flood said the other parts of the campus will open in the coming months. Those are an assisted living facility that houses up to 12 residents in all stages of dementia, an inpatient hospice care home that provides specialized care for up to 10 patients with advanced dementia and an adult day club that provides socialization and activities like painting, dancing and yoga for people with dementia, according to a news release from Hospice of the Valley.

Part of the education center is a “Memory Café,” described in a brochure from Hospice of the Valley as a “dementia friendly place to gather, socialize and have a bite to eat.” Flood described it as a place where families can "breathe a sigh of relief," knowing they are in a place where dementia is understood.

“If you have a loved one where it's very difficult to take them out in public because their dementia is advanced or there might be behaviors or it's just too challenging and you just feel uncomfortable with that,” Flood said, “you can come to our campus and of course, nothing that ever happens there is going to be out of the ordinary."

Socialization is important for people with dementia, McManus said. As dementia patients find it more difficult to navigate social situations, they can become withdrawn, which can speed up the progression of the disease, she said.

"Socialization is a critical piece of dementia care," McManus said.

“There will be professional caregivers who are specially trained in dementia care to engage the person with dementia because you can't leave them at home, so you bring them with you,” Flood said.

“And then the care partners can go in another room in the Memory Café and there's a trained facilitator there that can help walk them through some of the challenges that they are experiencing as the dementia progresses and as they're trying to provide the best care for the person they love. And they also get to share with other people who are on that same exact journey.”

Fundraising for the dementia campus is ongoing, officials say

Hospice of the Valley is raising funds to pay for the campus.

However, they expect to lose money because of the free training services provided by the education center, Hamilton said.

“This is really a gift from Hospice of the Valley to the community,” Hamilton said.

Flood said the dementia campus aims to provide dementia patients and their loved ones with both education and support in the same facility.

“I love that families don't have to go out and find all the different resources by themselves,” Flood said. "They're overwhelmed when they find out that someone they love has dementia and they become an instant caregiver, and to know that they're going to have education and support all in one place can give them such peace of mind.”

Christina van Waasbergen is a journalism student at Northwestern University and an intern covering health care at The Arizona Republic. Reach her at cvanwaasbergen@arizonarepublic.com.